The Neepawa Titans couldn’t dig themselves out of the snow when the OCN Blizzard hosted them last weekend! Friday the Blizzard came back swinging with a 5-3 victory against the titans that started 2-0 for the Titans early in the second period before Cyrus Toth and Dain Sardelli evened up the score 2 all in the second half. The Blizzard pulled ahead during the third period with goals by Ashton Paul, Drake Flynn and Bryden Sinclair.

The Blizzard kept on swining Saturday with a 4-0 shutout victory against many odds. Starting with a goal as home grown as it can get by Keilan Holland assisted by Ashton Paul the team would endure two seprate 3v5 powerplay oppertunities for the Titans and still overcome it all with goals by Cyrus Toth and Mike Hlady in the second period, followed by Aaron Lorenz into an empty net with 19 seconds left of the third period. On Saturday there were 43 shots on Steven Bacovsky and he stopped every single one of them.

The team heads to Swan Valley to face the Stampeders this Wendsday at 7PM.

The OCN Blizzard get ready to hit the ice against the Neepawa Titans in the second half of their series tonight and tomorrow At 7PM.

CJAR will be broadcasting tonight and tomorrows game starting at 6:45 pm at the GLMC.

The OCN Storm hit the ice tonight at the Gordon Lathlin Memorial Centre when they host the Norway House North Stars at 7:30 PM.

The Storm sit at 3rd place in the league, 10 points ahead of the North Stars, while also 10 behind the NCN Flames.

After tonight the Storm host the Cross Lake Islanders with a pair of afternoon games starting at 1:30 on Saturday and 2:30 on Sunday.

A tough game for the OCN Blizzard last night as they fell 11-0 to the Waywayseecappo Wolverines. The team has a few days break before hitting the ice at home again this Friday and Saturday against the Neepawa Titans.

Another Munn Cup Tournament is in the books. Seven teams took part in the 52nd annual event that started Friday. The Munn Cup wrapped up Sunday with a 4-0 win by the Thompson King Miners over The Pas Huskies. And the second Thompson King Miners team took on Teulon for the Crockett Cup in a close game that saw the King Miners take the win with a score of 4-3.

Another busy week at home for the OCN Blizzard. Last weekend The Blizzard fell 7-4 and 5-2 to the Neepawa Titans with goals scored by Drake Flynn, Mike Hlady (2), and Keilan Holland on Friday, followed by Dain Sardelli and Levi Theissen on Saturday.

The Blizzard host the Waywayseecappo Wolverines tonight at the Gordon Lathlin Memorial Centre starting at 7 PM. Then on Friday and Saturday the Blizzard wrap up their series against the Neepawa Titans here at home, with both games also starting at 7 pm.

A player for the Dauphin Kings has been suspended after making a racist gesture after Saturday’s 3-2 victory over the Waywayseecappo Wolverines.

20 year old defenseman Klim Georgiev can be seen making a “bow and arrow” gesture towards the Wolverines shortly after the final buzzer.

Georgiev was immediately given a gross misconduct penalty with a minimum one game suspension pending an investigation.

However some reports are saying it was a return gesture to a Wolverines player who had done a similar gesture minutes before.

The MJHL confirmed the suspension in a tweet on Sunday, stating it takes situations like this very seriously with no further comments at time of writing. 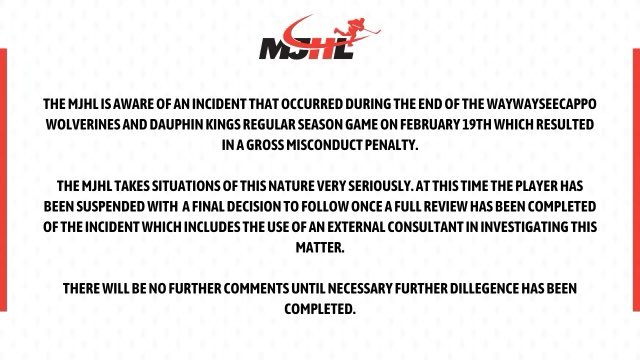 The OCN Blizzard are on the road to Neepawa for a pair of games against the Titans today and Tomorrow. The last time these two teams met in late October and early November the Blizzard Secured 6 of 8 points in the series.

The OCN Blizzard take a few day’s break after losing at home to the Swan Valley Stampeders 4 and 0. Today and tomorrow you can catch the team at the Roy H Johnston Arena serving breakfast until noon and pierogi at lunch for the Northern Manitoba Trappers Festival! The team hit the road this weekend to wrap up their four game series against the Virden Oil Capitals Friday and Saturday.

There’s lots to do in 2022 with the Northern Manitoba Trappers Festival! February 18th and 19th the 12th Annual Bannock Slap Street Hockey Tournament and Skills Competition kick off at the Roy H Johnston Arena, participants will be split into two age groups, from 11-15 and 16+. The entry fee is $150 per team with a chance to win $150-$450 and a trophy for the team.

In the skills competition participants have an opportunity to win up to $100 for the team and two large pizzas! Skills include Top Goalie, Top Shooter and target shooting.

The OCN Blizzard wrapped up their series with the Dauphin Kings with a huge win. The Blizzard kicked of the game with a goal only 14 seconds into the first period by Drake Flynn, scoring his first as a blizzard. Followed with goals by Riley Zimmerman and Levi Thiessen also in the first period.

The second period Saw Riley Zimmerman score his second of the night and a goal by Dain Sardelli.

Aaron Lorenz scored an early goal in the third followed by Drake Flynn again to wrap up the night 7-2 for the Blizzard!

One more game left of the OCN Blizzards 3 game homestand. This time it’s round 3 of the series against the Dauphin Kings with puck drop at 7PM. Last nights game wrapped up with a 4-3 loss to the Virden Oil Capitals with goals scored by Amraj Gill, Riley Zimmerman and Ashton Paul.

The Blizzard hit the road again saturday to wrap up their series against the Dauphin Kings.

The OCN Blizzard started their 3 game home series with a 3-2 overtime win against the Virden oil capitals! Brett Tataryn scored the first goal for the Blizzard in the first period followed by a scoreless second period and 2-1 lead for the Oil Capitals heading into the third.

Brock MacDonald scored the Blizzards second goal of the game in the final minutes of the third to bring the game into overtime. With Two Minutes of the first overtime period to go OCN Blizzard lead scorer Dain Sardelli scored the winning goal. They face Virden again tonight at 7PM at the GLMC!

The OCN Blizzard have signed the three top scorers from the Norman Northstars for a letter of intent for the 2022-23 season.

The Blizzard have signed forwards Clark Skaddan, Brady Krentz and Ian Snooks who all hail from Thompson.

All three players are having very good seasons with Krentz leading the way with 63 points in 39 games including 25 goals. Scaddan is the team captain and he has 48 points in 38 games.

Snooks has picked up 46 points in 39 games including 18 goals.

The Blizzard are looking forward to having all three of these players in their lineup for the up coming season and are excited about having talented players from the North.

The OCN Storm traded wins with the Norway House North Stars over the weekend. Saturday’s game wrapped up with a 4 goal hat trick by Chavez Constant, other goals scored by Blaine Dorian, Sheldon Chartier and Wesley Beardy to finish 7-5. Sunday’s afternoon game had a different tone for the storm, falling 2-8 against the North Stars. Both Storm goals on Sunday scored by Blaine Dorian.

The OCN Blizzard had a rough weekend when they faced the Dauphin Kings. The Blizzard lost 5-0 on Friday and 3-1 on Sunday’s much closer home game with a goal scored by Kayden Sutherland.

A much busier week is ahead for the blizzard when they host the Virden Oil Capitals tomorrow (Tuesday) and Wednesday, then the Dauphin Kings again on Thursday, before heading down to Dauphin on Saturday.

The OCN Storm hit the road this weekend with a pair of games in Norway House against the North stars. Saturday’s game kicks off at 7:30 while Sunday’s puck drops at 1:30. The games will be broadcasted on the Norway House North Stars Youtube Channel.

Hockey is back at the Gordon Lathlin Memorial Centre!

The GLCM will open their doors and return to a 50% capacity starting this weekend with a home game for the OCN Blizzard.

The Blizzard face the Dauphin Kings in round two of their series on Sunday at 7 PM. CJAR will be broadcasting the game starting at 6:45 PM with your pregame show.

After a rough weekend for the OCN Blizzard with a pair of losses to the Waywayseecappo Wolverines the team is preparing to face another top divisional rival, the Dauphin Kings. starting with Friday's away game at 7:30 and a home game on Sunday should COVID-19 restrictions allow. Goals this weekend were scored by Mike Hlady and Dain Sardelli.