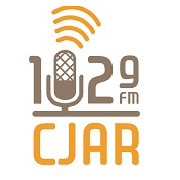 Nolan is a Torontonian who spent most of his summers growing up in Flin Flon. Him and his family would hit the road once a year and do the 36 hour drive making a few stops to camp or visit family in Winnipeg along the way.

At the ripe age of 10 he was the shiest student in class until his vice principle selected him to do the morning announcements… and now nobody can get him to be quiet! Nolan attended the broadcasting program at Durham College in Oshawa. He worked as a concert security guard throughout college, where he got to hang out with bands like the Arkells and The Glorious Sons! He quickly became an avid supporter of Canadian music, believing Canada has some of if not the best music to offer today! To no surprise his favorite bands are The Glorious sons, The Arkells and the Tragically Hip, but he’ll jam out to just about anything if the mood is right!

Nolan lives by the saying “don’t knock it till you try it” and is always front of the line ready to try the next fun thing, regardless how dangerous it might be. He’s taken a rally racing course and been right in the pit photographing many concerts!

Nolan is an automotive enthusiast at heart, often going for drives with no end goal aside from to enjoy the drive. He’s combined his love for cars with his love for photography and is always looking for the next beautiful spot to park and snap a pic for the memory book.

Nolan is looking forward to working with CJAR to bring you the latest and greatest in sports and entertainment!