The Pas Friendship Centre Family Colour Run
Flin Flon Armed Robberies
The new school year will be starting for most students in September
Construction on Cathedral Avenue
COVID-19 BULLETIN #154
The Halcrow lake Golf and Country Club Mens and Womens Open is this weekend!
Listen LIVE here - or ask ALEXA! We are also on the free Simple Radio App!
Weekly Auction- 32 Piece Wrench Set Value: $59.99
Be part of the Birthday Book! Call/Send us all your greets everyday before 8:25am!!

Posted about four years ago by Jaret Schneider

Growth, Enterprise and Trade Minister Cliff Cullen announced Friday the passing of a regulation by the Manitoba Government, to support and facilitate the acquisition and continued operation of the Kraft Paper mill in The Pas by American Industrial Acquisition Corporation. The mill which is currently owned by Tolko had announced in August its intention to close the mill by Dec. 2nd. On Sept 23rd, Tolko received a letter of intent from AIAC to acquire the Tolko Manitoba Kraft Paper Unit and Solid Wood Business Unit. The letter of intent included a number of requests of government and existing employees in order to ensure job protection through the seamless transition of the business and minimal operational disruption. The AIAC acquisition will allow for the preservation of existing jobs, both directly at the mill in The Pas and in affected support sectors including wood cutters. 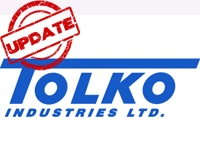