Preparing for a potential wildfire this time of year in Northern Manitoba is essential.
Opaskwayak Cree Nation Supports Black Lives Matter
Pisew Falls can easily be reached within minutes thanks to the accessible walkway.
Cranberry Portage RCMP are investigating a break in at the local high school
It has been reported that schools could reopen in Manitoba this September
The Sam Waller museum is taking precautions even as COVID 19 restrictions are being lifted.
Listen LIVE here - or ask ALEXA! We are also on the free Simple Radio App!
Weekly Auction- Esso Gift Card Value: $50.00
Be part of the Birthday Book! Call/Send us all your greets everyday before 8:25am!! 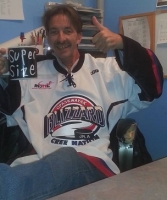 Mark Andrews radio career began at CHTM in Thompson, Manitoba in 2007. After two and a half years in the Midday slot, he moved to The Pas in December 2009 and started working as host of YOUR Morning Wake-Up at CJAR.

Mark truly loves The Pas, and says, it's the warm-hearted people in the Tri-Communities that make this place Manitoba's golden little secret. I've never found a better place to live and I hope to be able to call The Pas my home for the rest of my days!

Mark loves animals and you can see him every day, be it spring, summer, fall or the bitter cold of winter, out and about with his beloved pound rescue Mocha. Its no secret that he's a coffee guzzling man, but he's also a big fan of cooking---well sort of. He's a big fan of letting others cook for him.

Mark says, there's nothing I love more in life, then being in my big red comfy chair from 6-10 in the morning, knowing that I've been invited in to the kitchens of the people of this great community, for a coffee.

With a smile and a wink, he raises his Super Size mug and hollers to The Pas! CHEERS!